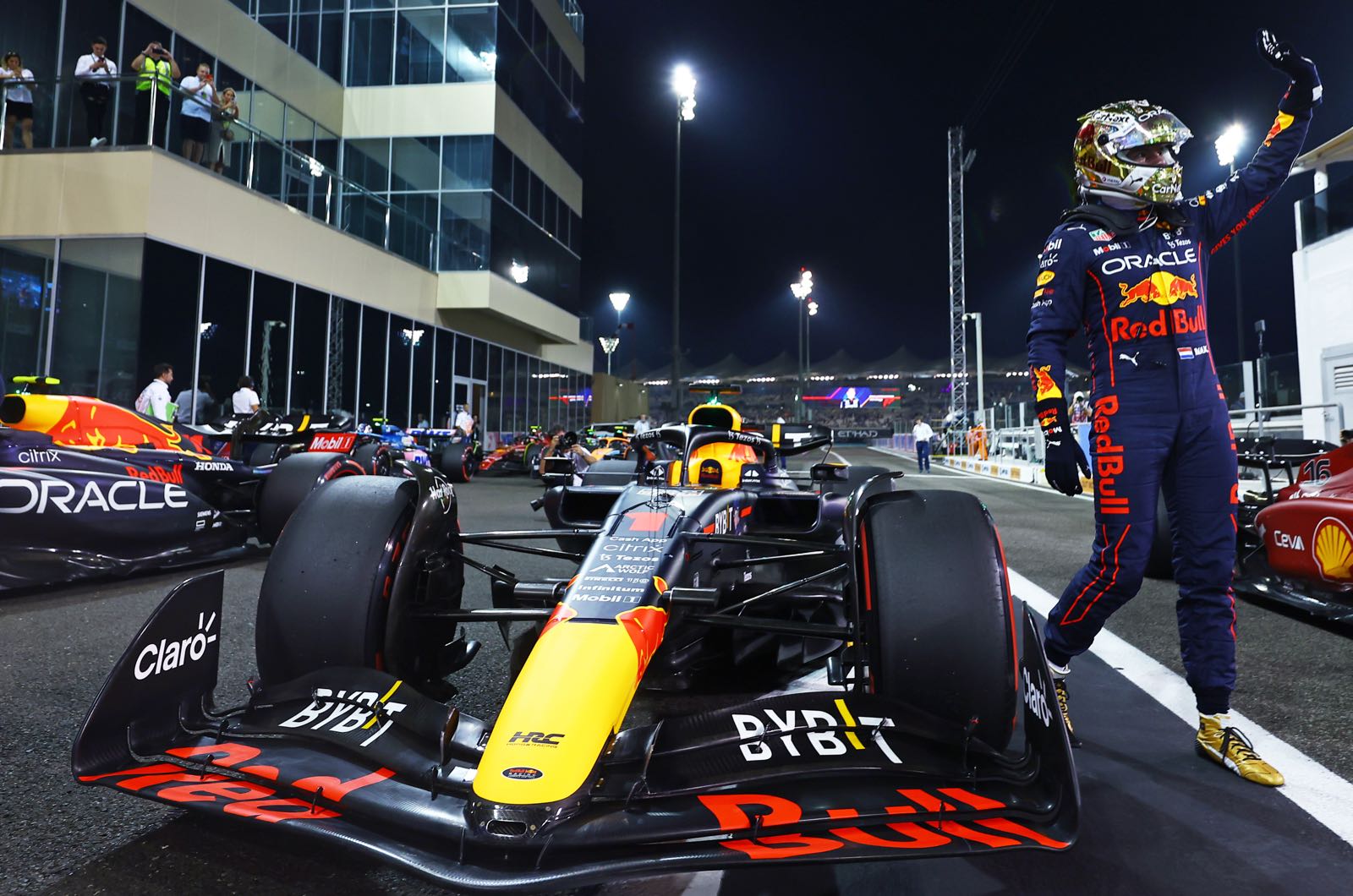 Leclerc holds on to second place in the Drivers' Championship, Perez finishes in third, three points behind. Alfa Romeo and Aston Martin tie on points, but Alfa takes sixth position in the Constructors' based on results.

Verstappen's win his 15th of the season, and is Red Bull's sixth win in Abu Dhabi, and is Verstappen's 35th career victory. Red Bull takes the Constructors' Championship with 17 wins in the 22 race season.

Carlos Sainz (24.892s) in the second Ferrari was fourth, followed by George Russell (35.888s) in the Mercedes GP was fifth, Lando Norris (56.234s) in the McLaren-Mercedes, taking fast lap, was sixth, Estabon Ocon (57.240s) in the Alpine-Renault was seventh, Lance Stroll (1m16.931s) in the Aston Martin-Mercedes was eighth, Daniel Ricciardo (1m23.268s) in the second McLaren was ninth and four-time World Champion Sebastian Vettel (1m23.898s) in his final career race took the final point in tenth place.

Before the start of the final round of the Formula One season after eight months from the first race, Verstappen and Perez in their Red Bulls sit on the front row, the Ferraris of Leclerc and Sainz are on row 2, the Mercedes of Hamilton and Russell on row 3, Norris and Ocon on row 4 and Vettel and Alonso rounding out the top ten positions.

Medium and hard tyres and the expected tyres for the race, and we will see if it will be a one-stop or two-stop strategy.

All drivers starting on medium tyres except for Magnussen and Bottas on hard, and Gasly on soft tyres.

At the appointed time, with the sun going down, the grid clears and the drivers take to the formation lap. The lights go off and the race begins with Verstappen gets a fast start with Perez, Leclerc, Hamilton, Sainz, Norris, Russell, Ocon and Vettel.

Hamilton and Sainz battle and touch, but both continue. The Stewards will investigate.

On lap 4 the stewards ask Hamilton to give the place to Sainz, and he does.

On lap 5 Hamilton passes Sainz in the DRS to take back fourth place. Russell passes Norris for sixth. Hamilton is chasing down Leclerc in third.

Hamilton has fallen back to Sainz and Sainz takes fourth.

Vettel and Ocon are battling for eighth.

Hamilton "I'm losing power man, what is going on".

Vettel is still looking for a way past

On lap 13 Albon pits and switches to hard tyres and rejoins last.

On lap 14 Hamilton tells Mercedes, "there is something up with the car."

On lap 15 Ocon, Tsunoda, Schumacher and Gasly all pit.

Vettel passes Perez on his out lap for fifth.

On lap 16 Perez comes back and passes Vettel for fifth.

Sainz pits from third for another set of medium tyres and rejoins seventh.

On lap Hamilton pits from third for hard tyres and rejoins in ninth.

Verstappen pits from the lead for hard tyres and rejoins in second behind Leclerc.

On lap 21 Leclerc pits from the lead for hard tyres and rejoins in third behind Perez.

Russell passes Vettell for fifth - at the same time is given a 5-second penalty for an unsafe release.

Sainz is close behind Leclerc.

The Ferraris seem to be slowly catching the two Red Bulls at the front.

On lap 28 Alonso pits and retires.

Russell tells Mercedes, "I don't want to pit too early."

On lap 33 Sainz says that he is starting to stuggle on tyres.

On lap 34 Perez pits from second, the first to make a second stop, for a set of hard tyres and rejoins in sixth.

Leclerc is in second place, expected to try to run to the finish, Perez in sixth place.15 seconds behind Leclerc.

Hamilton has closed to a second behind Russell.

On lap 39 Schumacher and Latifi make contact and go off the track, and then rejoin.

Hamilton tells Mercedes "don't leave me on one stop mate."

On lap 41 Stroll pits for medium tyres and rejoins 12th.

Schumacher is given a 5-second penalty for colliding with Latifi.

On lap 42 Ocon pits for hard tyres and rejoins ninth.

Norris pits from sixth for hard tyres and rejoins in seventh.

Red Bull tells Perez that he will catch Leclerc before the end.

On lap Perez passes Hamilton, but Hamilton comes back and retakes third.

The next lap Perez passes Hamilton in the DRS.

Verstappen tells the team that Perez should have no problem making his tyres last.

Hamilton asks "are we too late to stop?" and the team reports he would drop back to fifth or sixth.

Hamilton is warned for track limits.

Hamilton says, "we should have stopped man".

Hamilton reports that he is losing shifts, and slows.

Crossing the finish Verstappen wins over Leclerc and Perez.

Verstappen said after the finish, "Was a good race, all about tyre management. Incredible to win again here and 15th win of the season - unbelievable. It's been really enjoyable to achieve something like this this year, I know it will be hard to replicate but it is good motivation to try and do the same next year."

After the race Vettel said, "I enjoyed the race, once the lights go off it was full on race mode. We didn't go for maybe the best strategy, but overall it was a big day and thank you for the support. So many flags, so many supporting faces. I'm sure I'm going to miss this more than I can think of. I don't have much more to say, I feel empty, it's been a big weekend. These last two years have been disappiointing to me from a sporting point of view but big for me in my life. I want the other drivers to carry on the good work, I think there are far bigger and far more important things than racing in circles."