Practice 2 Report - The most important session 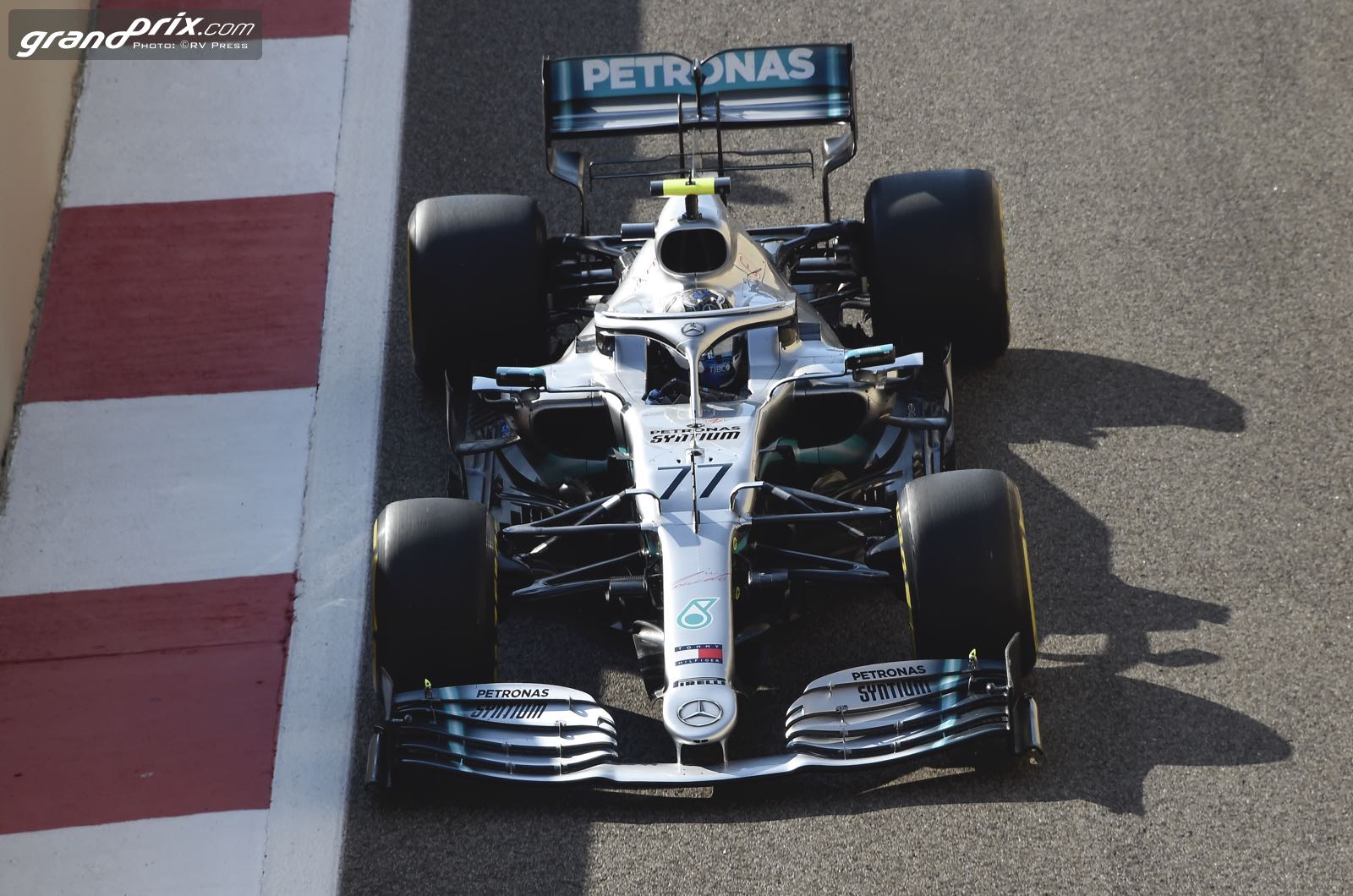 Free Practice 2 for the Abu Dhabi Grand Prix was the most important of the three practice sessions of the weekend. It started at 5 p.m. local time, which was the same time that qualifying and the race would kick off. Sunset was at 5:33 p.m. Finding the best chassis set-up, Verstappen said, is "always a challenge in Abu Dhabi as we transition between day and night practice sessions with FP2 the most important session as it gives you the most representative read of qualifying and race conditions."

Taking that into account, the fastest combination in FP2 and therefore qualifying and the race, was Valtteri Bottas and Mercedes.

Bottas was fastest in FP1, clocking a 1:36.957 on the Pirelli medium tires. That session was punctuated by Ricciardo's Renault having a spectacular engine blow up, and Vettel spinning into the barriers.

Perez set the early mark of 1:38.870. The drivers were all on the hard and medium compound Pirelli slicks in this early part of the session. That included Hamilton, who radioed that he was having problems with his downshifts, and Verstappen who took the lead at 1:37.145.

The Renault mechanics had replaced the engine and made other repairs to Ricciardo's car, and he left the garage 15 minutes into the session. Vettel's car had also been fixed, and he was soon up to fourth place behind Verstappen, Bottas and Leclerc.

At sunset the order was: Verstappen, Bottas, Hamilton, Leclerc, Vettel, Albon, Perez, Stroll, Magnussen and Sainz. And now it was time to fit the soft slicks and try some qualifying simulations. Leclerc was the first out, and he had the track to himself when he had "wobble" and kissed the barriers coming out of Turn 19 with the righthand side of the car. Back to the pits he went. It was the same place where Vettel had spun in FP1.

Other drivers soon took to the track on the softs, including Bottas who did a 1:36.256. Hamilton slotted into P2 with a 1:36.634. And Vettel took P3 at 1:37.114 until being displaced by Verstappen. Albon and Grosjean rounded out the top six as the midpoint of the session approached. But now Leclerc's car had been replaced and he was back in action with a 1:36.642 which slotted him into third.

Then it was Giovinazzi's turn to spin at Turn 19, but he managed to avoid the barriers.

FP2 was important not only for finding how the car would be in qualifying but also its race pace. And now most of the drivers were in the garages preparing for their race simulations.

Drama with 20 minutes when Bottas and Grosjean collided. Bottas had dived inside to pass in Turn 11, and Grosjean had cut down on him. Both drivers got their damaged cars back to the pits. The session was red flagged because of the debris on the track. The cleanup took seven minutes. And then it was back to the race sims for all the drivers except the crashing duo.

At the end of this most important session the top 10 was: Bottas, Hamilton. Leclerc, Vettel, Verstappen, Albon, Grosjean, Perez, Kvyat and Gasly.