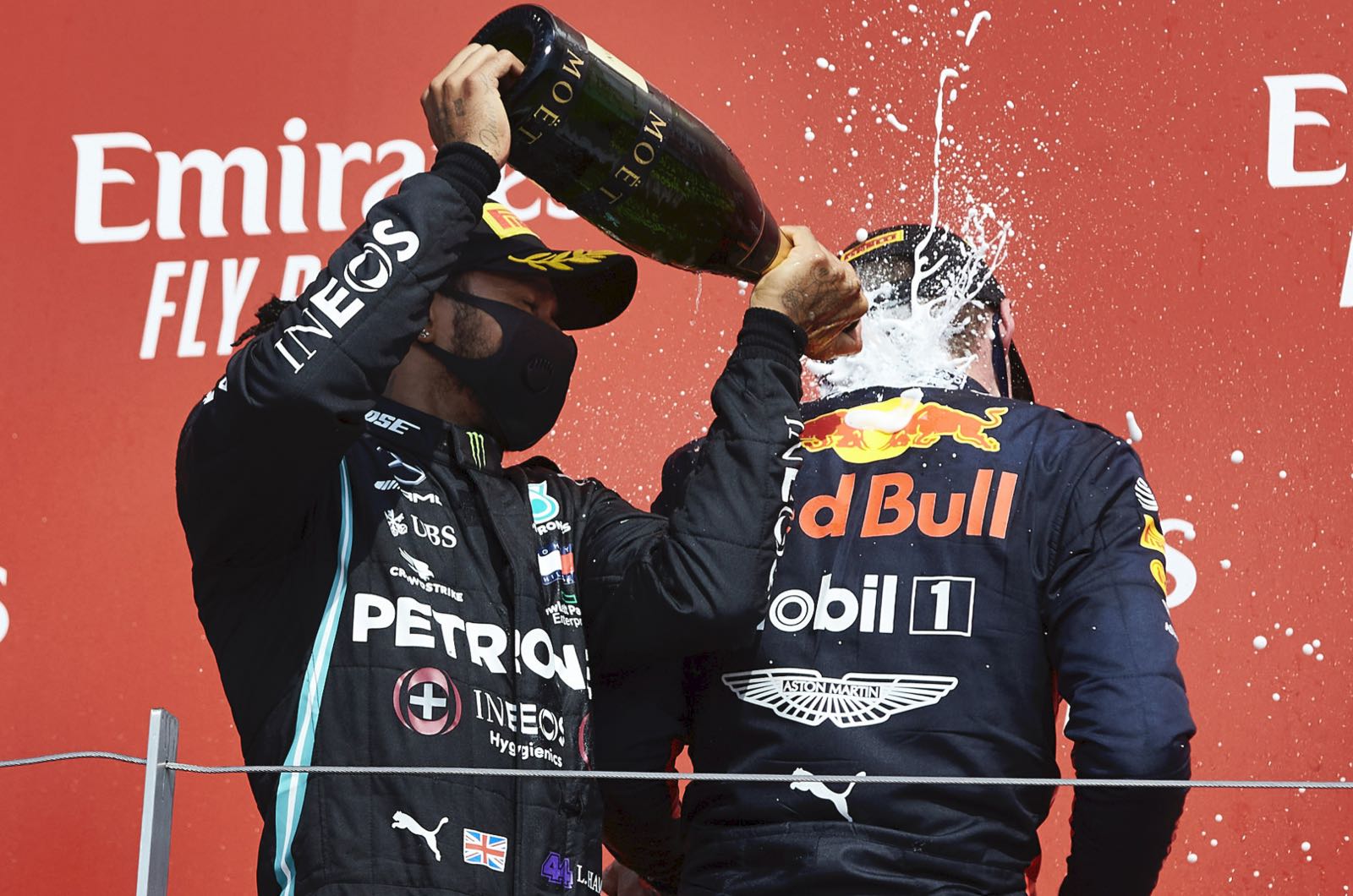 Max Verstappen won F1's 70th Anniversary Grand Prix as he was able to set a pace in his Red Bull that Mercedes drivers Lewis Hamilton and Valtteri Bottas could not match because the tires on their cars were blistering. Here is how Verstappen earned his ninth F1 victory.

The top 10 qualifiers must start the race using the same set of tires they used to clock their fastest lap in the Qualifying 2 session. Verstappen was the only one of those top 10 to use Pirelli's hard compound slicks, while the other nine drivers used the medium compound tires.

For the 67th time the Mercedes team lockout the front row of the grid. Bottas was on pole for the 13th time, and Lewis Hamilton was alongside him.

Sergio Perez was still testing positive for Covid-19, so once again Nico Hulkenberg took over his Racing Point. The Hulk qualified third, and shared the second row of the grid with Verstappen. Daniel Ricciardo (Renault) qualified fifth, and Lance Stroll (Racing Point) lined up sixth.

It was crucial for Bottas to make a good getaway to make sure he took the lead over Hamilton. And he did just that.

At the end of lap 1 the order was: Bottas, Hamilton, Verstappen, Hulkenberg, Stroll and Ricciardo.

After the first dozen of the race's 52 laps both Mercedes drivers had blisters on their medium compound tires. Bottas pitted at the end of lap 13 and Hamilton stopped a lap later. Both got the hard compound tires.

Verstappen took the lead on lap 15, and his set of hard tires was holding up just fine.

In fact, Verstappen was lapping faster on his well-used set of hards than the Mercedes drivers were doing on their new hard tires.

Verstappen finally pitted at the end of lap 26 for a set of medium compound tires, Bottas briefly took the lead, but Verstappen was soon back in front.

Both Verstappen and Bottas came in at the end of lap 32 for new rounds of the hard Pirellis.

Hamilton was now in the lead, and still on the same set of tires he got at the end of lap 14. He had slim hopes of making it to the finish without another pitstop.

Verstappen was 11 seconds behind Hamilton, and Red Bull told him close the gap.

Hamilton dived into the pits at the end of lap 41 to get new hard tires.

That put Verstappen back into the lead ahead of Bottas and Charles Leclerc, who was on a one stopper in his Ferrari, and Hamilton.

"We were able to run longer with greater pace," Red Bull team principal Christian Horner said. "So we were actually able to create an overcut on the Mercedes on an older tire and bagged track position. That enabled us to switch our strategy and run the medium tire and then cover them with the hard tire, which effectively put us in a straight race on the same compound of tire. All of that was possible because the way that Max managed the tire and the pace we had in the car."

Hamilton was flying, and he overtook Leclerc on lap 45. He then closed in on Bottas.

The Mercedes drivers were told that they were free to race, but they had to give each other space.

Hamilton grabbed second place from Bottas on lap 50, but he could not catch Verstappen in the final two laps.

"Congratulations to the Red Bull team and to Max," Hamilton said. "You look at their tires they don't have the problems that obviously we had today. Definitely unexpected to have the blistering as hard core as we experienced it, but I'm really grateful to have progressed and managed to just get my way through the race. I think I had blistering right at the end again, but I had been pushing pretty heavily to catch the guys in the lead."

"That was a frustrating race today," Bottas said. "It's never great to start from pole and finish P3. I think we were pretty much on the backfoot from the moment I lost track position to Max."

"It's a great day and I'm very happy with the result as we did everything really well as a team," Verstappen said after winning. "The race showed we had the right strategy after our decision to qualify on the hard tire and I'm pleased it paid off.

"I think the length and pace of our first stint was the key to being competitive as the mediums don't last that long, so starting on the hard was definitely the right call. We can see the car works well on softer compounds, especially in the race, and it looks after its tires. When you are able to overtake and pull away from a Mercedes it is really satisfying."